Two weeks ago I started renting a room in west London. I’d been looking for a place for months, and it was becoming clear that I would have to compromise on one of my property preferences to avoid being homeless.

I have this thing where I can only live somewhere that is seven or less minutes away from an underground station, so you can imagine the dilemma I was faced with when I found this cute little place with the nearest station being a shocking nine minutes away.

Luckily for me and my decision making, there were a number of bus stops dotted around, which would turn a nine minute journey into a two minute one.

As I jumped on a bus one Monday morning, thinking about how lazy the driver must think I am, sitting down and getting off after one stop, an announcement was played on the bus: “From the 6th of July cash fares will no longer be accepted on TFL buses, to find out other ways to pay, please head to tfl.gov.uk”

I looked around at the emotionless faces on the bus to see if anyone else was as shocked as I was to hear that news for the first time. Everyone was calm and seemed annoyed when I asked the bus driver to play that message again so I could come to terms with it.

TFL ran a consultation from 19 August until 11 October last year, proposing to go cashless on its bus services in 2014. They received responses from over 37,000 people, most of whom thought the proposal was bad for London.

But that was around the time when Beyonce changed her hair, people were getting shot in Kenyan shopping malls and Miley Cyrus stuck her tongue out, so like the other 8,136,941 million people in London, I didn’t partake in or notice the consultation.

According to TFL, most customers who pay by cash for bus tickets do so infrequently. So infrequently that last year cash fares fell to around 1% of total bus journeys, compared to 20% ten years ago. So removing the option to pay by cash wouldn’t really affect the majority of bus users.

Now I’m not calling TFL liars, and I received no response when I asked Leon Daniel, the head of surface rail to provide me with their findings, but it’s hard to believe that only 1% of total bus journeys are paid for with cash.

I see people trying to pay with cash all the time! Especially tourists and old people. Particularly when you’re in a rush. They bring out their pennies and start asking delay-everyone’s-journey questions.

Another reason for going cashless is the cost of collecting cash. Yes you read that right. It costs money to collect money. On bus kit maintenance, replacement ticket machines and contracts with operators cost so much that apparently we, sorry TFL, will save £24Million a year by 2020. That £24 million will be reinvested into the transport network for the benefit of everyone. Well apart from the 1% of people who were using cash and don’t give a shit about reinvestment.

And that’s great, but I didn’t ask for those things. How about providing shelter at all bus stops. You’re making us crowd into doorways when it rains, stepping on anti-homeless spikes to keep warm. And would it hurt to install a countdown display that actually works? Like when it says five minutes it actually means five minutes.

Or what about giving us some non slanting, ass-wide seats. Why must this hate for the homeless affect us all?

The consultation also revealed that cash payers would benefit from a cheaper fare, saving a whopping £1 a trip if they switched to Oyster or contactless payment.

But what’s £1 to a stranded and very hot girl in a tight dress trying to get home from a party she shouldn’t have been at in Kilburn?

TFL has promised to give bus drivers new and refreshed guidance to ensure a consistent approach is taken when dealing with vulnerable passengers.

Vulnerable meaning young, disabled or old and not hot in a tight dress and surrounded by guys screaming “One Arda”. Though if you are hot, stranded and feeling scared, there’s this new magical thing TFL have introduced, a life changing idea called ‘one more journey’. This will allow passengers who have less than the single bus fare but a positive balance on their card, to make one more bus journey.

Which is fine if you only need one bus to get you seven minutes away from your front door. But if you need to get off that bus and take another one, then yeah, you’re pretty much in the same position you started in. Just a bit more desperate because you’re almost home and start thinking whether or not the creepy looking taxi driver across the road will accept hugs as payment.

Despite mention of the ‘one more journey’ feature on almost every page of the consultation, it doesn’t take into account that on average 2115 Oyster Cards were lost, stolen or stopped working every day last year. Making the one more journey feature useless to a lot of people.

And don’t talk to me about contactless payment cards as a back up plan. I don’t have one. And 11/27 of my friends I asked don’t have one either. What would we do if we didn’t have a CPC or Oyster Card? Pretend we’re vulnerable?

In fact should we all just claim to be vulnerable and get free bus rides? I was on a bus in Tottenham a few years ago, when eight guys waltzed onto a bus, all without paying and the driver did nothing. Nada. Nichts. He’s not going to challenge a group of teenagers is he? He didn’t sign up for that.

London Travelwatch raised concerns to TFL saying they believed that there would be increased disputes between customers and drivers when their hard earned cash is turned away.

There were also concerns about occasional visitors to London who don’t see a need for an Oyster Card. Of course a lot of tourists do have them. But some don’t and they might feel uncomfortable using CPCs if they own them. I see tourists struggling with transport related issues all the time in London. Why make things even more difficult?

Some tourists still don’t know how to use an escalator properly and you want to trust them with Oyster Cards, CPCs and bombard them with card clash announcements?! Have you ever tried translating card clash to someone who doesn’t speak english???

And what if it’s your first time in London, how are you supposed to know about buses going cashless? Are they handing out leaflets on the planes?

In regards to publicising the change TFL reckon they done a pretty good job.  They produced an online consultation form on their website, posted 3000 posters across the bus network (there’s almost 20,000 bus stops in London) none of which I saw. They also publicised the proposal on their Twitter and Facebook accounts and had stories running on various news sites. So in their defence they’ve given us plenty of time to adapt to the change. Whether or not we were paying attention is our problem. 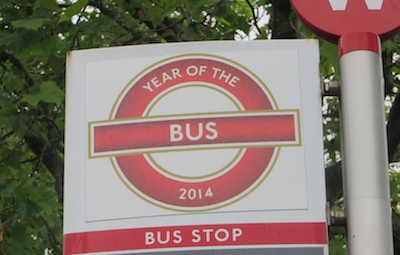 Which brings me to my next point. Did any of you know that 2014 is the year of the bus? No? Oh You didn’t see the posters for that either?

Boris Johnson launched the ‘Year of the Bus’ with 12 months of events and activities to celebrate the ‘pulsing red arteries of the capital’.

Seems like very bad timing to make such a change to these arteries if you ask me. It’s been 60 years since the creation of the iconic Routemaster, and to mark the event you fuck with us?

Do you know how much effort and money is going into the Year of the Bus celebrations? Regent Street got closed off for a day, the TFL choir (yes they actually exist) performed, a bus shelter was constructed out of Lego. They’ll even be buses parading in Notting Hill Carnival! On the family day of course…

So why now TFL? Why not wait until the 1% was 0. Is this just another way for the government to monitor our movements? Do they want everyone to go contactless and register their Oysters so they have more data to sell? Are we being punished for all those years of free transport on bendy buses?

It seems there’s not so much we can do now. TFL have said these changes are permanent, and it doesn’t look like anyone is boycotting buses MLK style.

Perhaps we’ll just wait until the first cashless bus related death happens. Then we can head down to TFL’s head office and be like: